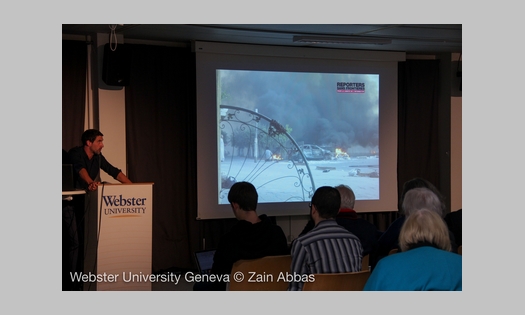 Un séminaire co organisé par Webster University, Genève, et Reporters sans frontières (RSF) à l’occasion de la journée internationale de la fin de l’impunité pour les crimes commis contre les journalistes.
La conférence est désormais disponible en cliquant ici
Visionnez les photos de la conférence en cliquant ici.
War journalists have always confronted extreme risks in order to report from conflict zones. However, they increasingly find that they are also the direct targets of violence, kidnapping and murder. According to Reporters without Borders, this year 40 journalists, 4 citizen journalists and 8 media assistants have been killed so far; the true figures are likely higher as these only include cases in which it has been proven that journalists were killed or kidnapped because of their work.
Although legally protected when they enter conflict-zones under International Humanitarian Law, in these complex and dangerous settings, it is impossible to bring those responsible for these crimes to justice.
The impunity surrounding crimes against journalists, as well as being a fundamental issue of human rights, has profound implications for the freedom of expression and the freedom of the press. This is why, following the tragic assassination of two French journalists in Mali on 2 November 2013, the international community united to raise awareness of the need for journalists to be protected by creating the International Day to End Impunity for Crimes Committed Against Journalists.
In commemoration of this International Day, at this seminar, war journalist Gaetan Vannay * will draw on his extensive experience in the field to provide a first-hand account of the dangers of reporting from conflict-zones. He also explores the implications of these dangers for the freedom of speech and, also, for democracy.
The event will be opened by Alain Modoux, whose career reflects his long-standing commitment to the safety of journalists and the freedom of the press. Modoux has worked in favour of journalists’ safety for both the International Committee of the Red Cross (ICRC), where he created the ‘ICRC Hot Line to assist journalists on dangerous professional missions’ and for UNESCO, where he was Assistant Director-General in charge of the ‘Programme for Freedom of Expression, Democracy and Peace.’ His current work is based in Geneva where he is a Board member and Vice-President of the ICT4Peace Foundation, specialised in Crisis Information Management and International Policy and Diplomacy in Cyberspace.
This seminar will be followed by a question and answer session and a free cocktail during which guests will have the opportunity to learn more about the work of Reporters without Borders.
Keynote speaker:
* Gaetan Vannay is COO of Securaxis (www.securaxis.com)- a company dedicated to the security of people travelling in hazardous environment, war reporter, member of the board at RSF Suisse.
He has been a reporter for over 15 years, working for Swiss and international media. Swiss Broadcasting Corporation (RTS), Radio Canada, Radio France (France Info, France Inter), Al Jazeera, Le Temps, among others. He has been reporting international crises since the early 2000s. He reported from Chechnya, Ukraine, Georgia, Zimbabwe, Ivory Coast, Tunisia, Libya, Syria, Egypt, and many other places. Gaetan Vannay won Swiss and international awards and nominations for his reports. As a motto, he strongly believes that analyse and theory should backed by “boots on the ground”.
Previously correspondent in London and Moscow, he is currently based in Geneva. Head of the international affairs news desk at the RTS-radio between 2009 and 2014. He majored in science at the college of the Abbaye de St-Maurice, studied journalism at Neuchâtel University, humanitarian law at Geneva University and Russian language at the Ural Technical Institute in Ekaterinburg (Russia).